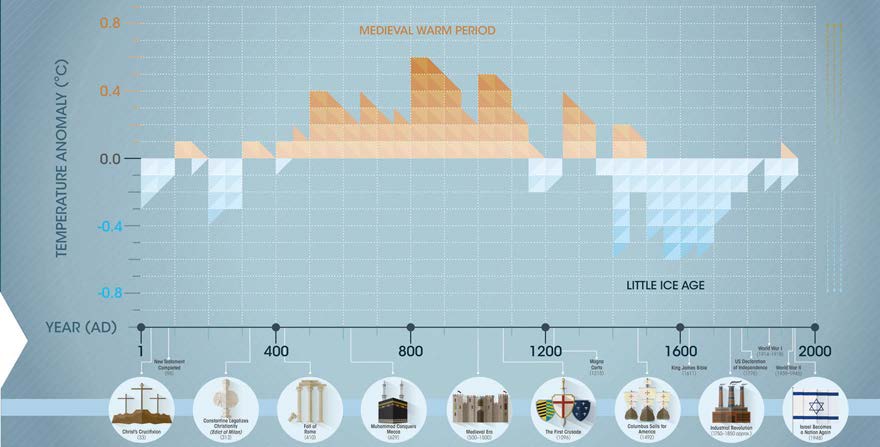 Yes, climates change. But what causes the fluctuations and what do they mean? Once again, how one answers these questions is entirely dependent on their worldview. And wrong assumptions about the past will lead to wrong conclusions about the present and future.

Secularists wrongly assume that the earth is billions of years old, that the ice sheets of Greenland and Antarctica and tree ring dating accurately “record” climate data for tens of thousands of years, and that the earth’s climate has been extremely stable for roughly ten thousand years. Therefore, the minor temperature changes observed today are considered dynamic, extraordinarily rapid, and catastrophic if the trend continues. And trends are expected to continue in a prolonged fashion because that’s what they’ve done for “millions of years.” Since these changes occurred in the narrow window of man’s technological boom, he’s likely
to blame. But this understanding of earth’s history is built on one unprovable, anti-biblical assumption after another. Fundamentally, this model rejects biblical history, the account of earth’s history given by the Creator Himself.

God’s Word gives the real historical account. The earth is around 6,000 years old, and the original creation and climate were perfect (Genesis 1:31). In Genesis 3, man’s sin corrupted all of creation, including the climate (Romans 8:22). Man did cause climate change! Nearly 4,300 years ago, Noah’s Flood wrecked and rearranged the earth and its climate (Genesis 6:13).

Post-Flood, there was a transitioning climate, including an ice age that covered about 30% of the earth’s land surface in ice. As the world settled and the ice age receded, the transitional climate oscillated and stabilized into the present climate.

Understanding this, the biblical model expects variations in temperature and powerfully explains actual climate data. It explains the major temperature/climate changes of centuries ago, long before man-made greenhouse gases. The Medieval Warm Period (A.D. 800–1200) saw average temperatures higher than the warmest years of the past few decades. The Little Ice Age (A.D. 1400–1880) had average cooler temperatures than those of modern times. Apparently, the global temperature cycles around an average temperature that’s been slightly warmer in the past. Not appealing to man-made CO2 for temperature fluctuations makes sense of these often-avoided facts: CO2 is essential to life (especially plants) and is a good thing, water vapor is responsible for 80–90% of the total greenhouse effect, and man-made CO2 is responsible for less than 1% of the greenhouse effect.1

Climate change is the end times apocalypse for secularists. For some, their passion is genuine, and for others, it’s seemingly based in a selfish ambition. But Scripture is explicit that climate change won’t end this world. The world and its climate will endure until Christ returns (Genesis 8:22). Then the heavens and earth will be replaced by a new heaven and a new earth (2 Peter 3:7–13;
Revelation 21:1–8). This is the “climate change” everyone needs to believe in!